In some temperature monitoring applications there are normal fluctuations that only cause product issues if the temperature change is maintained for a long duration.

Short-duration changes have little effect on product. And the usual practice is to set the monitoring system thresholds to the product’s storage specifications. When using a sensitive temperature probe, a buffering mechanism will prevent short excursions from creating false alarms.

But how did we create our cylinder probe buffer? How do we know it equates to other industry standard and accepted devices?
There is a simple answer and a complex answer. For the simple answer, we understand the common operating environments use by our customers for monitoring samples, drugs and vaccines (2 – 8°C). We also understand the thermal properties of common buffers (40 mL glycol 20%), and the thermal properties of metals.

For our thermal buffer blocks, aluminum was the material of choice because of several characteristics that make it effective: it’s cost-effective, light, strong, malleable and therefore easily manufactured, corrosion resistant with satisfactory thermal and electrical conductivity properties. 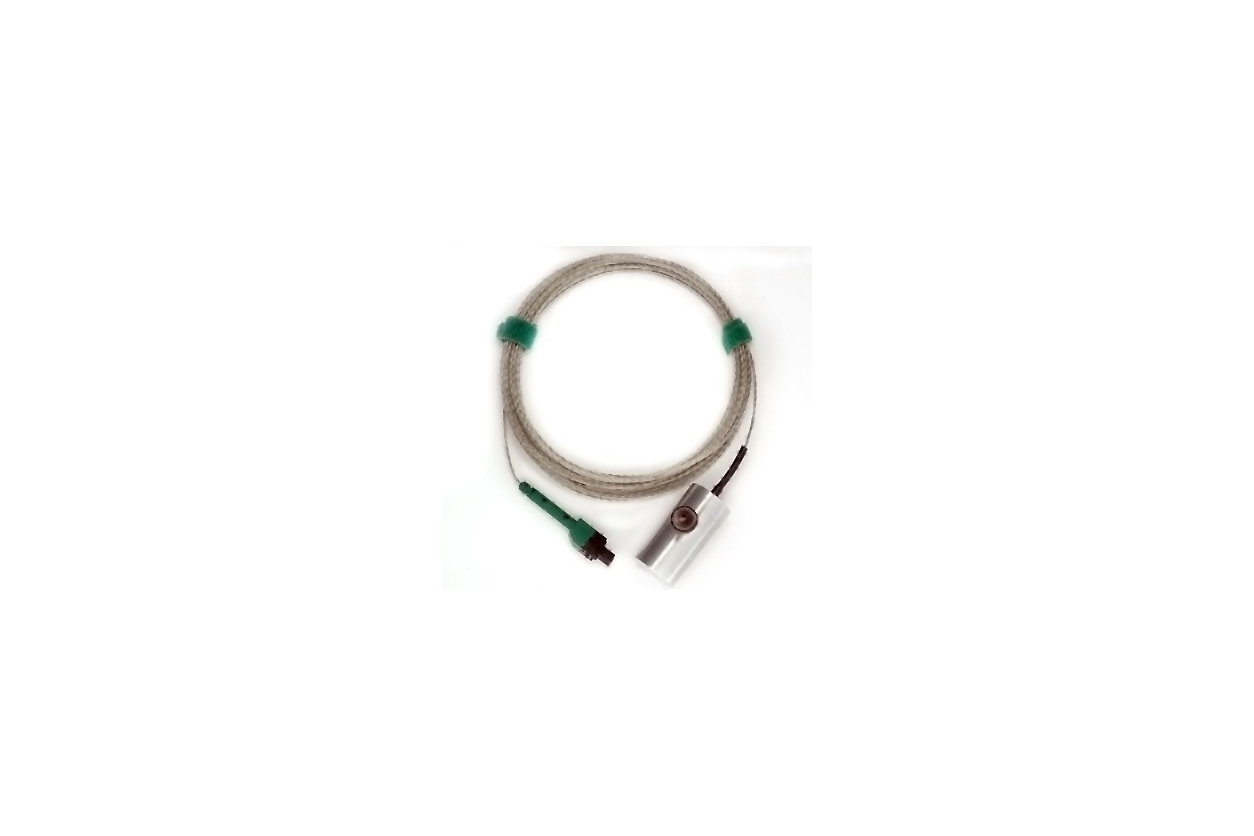 Creating the Perfect Thermal Buffer (for us) 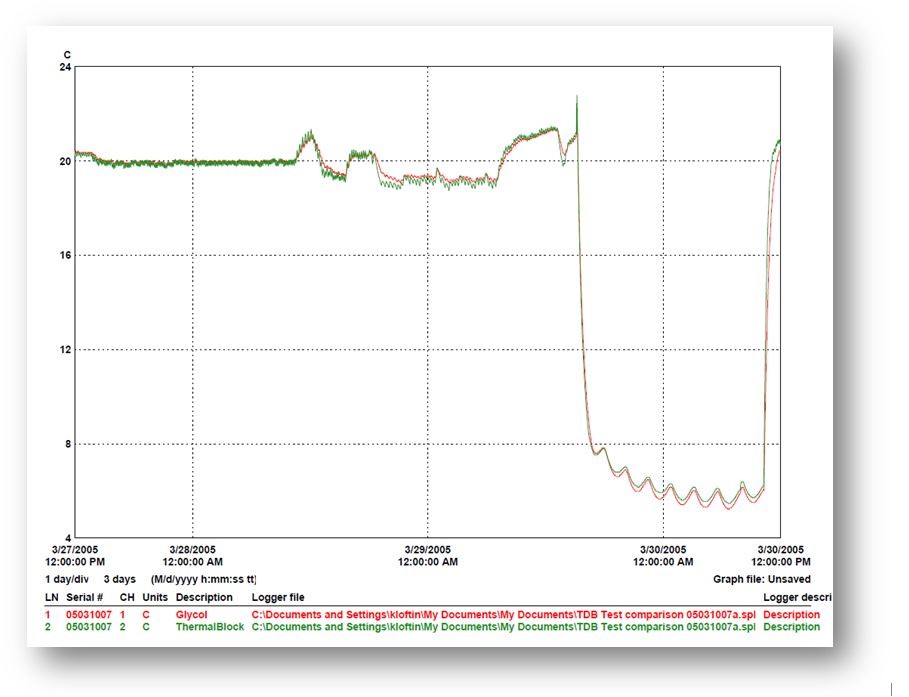 This temperature graph shows one of many tests once we created the aluminum cylinder buffer. The red line is a temperature probe inside a 40ml of glycol bottle of glycol, a standard liquid media used to buffer a temperature sensor, delaying its reaction to a temperature change.
The green line is the buffer. We were able to construct the cylinder based on two known facts about aluminum: its thermal capacity and specific heat.

Let's take a science refresher for the second, and more complex answer…

For comparison, here are some common known values:

It's a little more complicated when we look at the specific heat of ethylene glycol, which changes with the concentration percentage by volume (but not a lot). We also need to consider the temperature the solution is in.

In a refrigerator used to store vaccines or many parenterals, the temperature is maintained between 2°C and 8°C. For simplicity's sake, we will use the middle of that range 4°C and a media concentration of 100%. The specific heat capacity of 100% Ethylene Glycol is known to be 2.35J/g /°C.

Those are fun facts (sort of). But a more interesting point here is that the heat capacity depends upon the size of the object, whereas specific heat is not dependent upon size or mass. 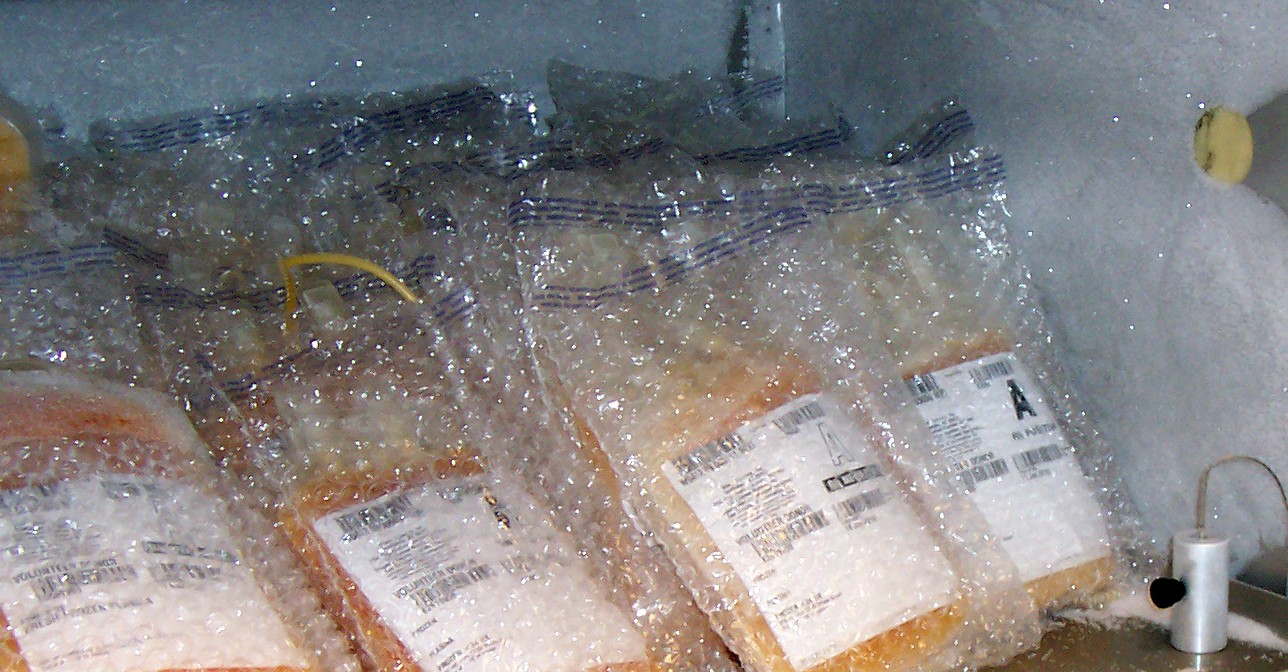 To see this applied in research on thermal buffering methods, we invite you to read the research documented in a paper published by NCSLI. They tested 20% concentrations in several aqueous media in different vial sizes, but found no significant differences.

Instead, their tests determined that the location of the probe inside the chambers had a larger impact. Meaning, whatever buffer you use for whatever probes you use, probe placement within a given volume is crucial. Placing the buffered probe in the geometrical center of the monitored space will be usually be the most representative of the temperature of the space.

Back to the original question of thermal blocks

We had an issue with our probes... we could place them in glycol, sand, glass beads, or another commonly used media. But our customers told us the beads and solutions were bothersome. Spills happened all the time, especially in dynamic clinical environments. And we knew that much from experience, and didn't want to use liquid media for our own testing processes.

Based on an understanding of our own probe performance, along with the known values of specific heat and heat capacity of aluminum, we designed aluminum cylinders to approximate a 40 mL bottle of glycol – the most commonly used probe buffer we had encountered.

Creating a purpose-built buffer for our thermistor probes put us in control of variables such as the fit of the probe inside the cylinder. If the hole is not perfect fit according to the length and diameter of the probe, the thermal buffering is affected; the probe may simply end up sampling air temperature, thereby negating the effect of the buffer. As a result, we don't recommend using our thermal blocks with non-Vaisala EPT probes. 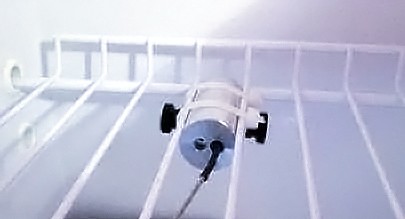 With our tailored buffer we also control and negate noise in the data. In designing the blocks we included a screw to hold the probe firmly, but also to allow the probe to be removed on occasion for periodic calibration testing. We added a second hole and screw, to allow another probe to be added to the buffer for easy point-of-use verification of probe readings.

We ended up with a temperature buffer that matches a 40 mL bottle of glycol.  During our in-house research while designing our aluminum probe block, our findings matched those of the metrologists who wrote the NCSLI technical paper: "Optimizing Data Logger Setup and Use for Refrigerated Vaccine Temperature Monitoring" already cited. Although they used thermocouples for their testing, and our EPT probes are thermistors, we also found that probe position inside a chamber was the most important factor in the temperature data being representative of the chamber.

The choice of buffer type, concentration, and size, had far less effect than where the probe was placed, even in a pharmaceutical grade refrigerator. We found that both liquid and solid buffer media dampen temperature fluctuations, effectively stopping false alarms, and giving data that more closely resembled the thermal properties of the product, rather than the air. With this in mind, we made our cylinders easy to tie into place with standard cable ties, as shown.

The choice of buffer type, concentration, and size, had far less effect than where the probe was placed, even in a pharmaceutical grade refrigerator. We found that both liquid and solid buffer media dampen temperature fluctuations, effectively stopping false alarms, and giving data that more closely resembled the thermal properties of the product, rather than the air. With this in mind, we made our cylinders easy to tie into place with standard cable ties, as shown.

Below find some resources for further readings and references that formed the bulk of the basic physics in this blog.

If you have specific questions about your application, the best folks to talk to are ourApplications Engineers because they have seen enough cases to know how thermal cylinders work, and where alternate buffering media will be more appropriate for your applications.